I have two of these at my desk: 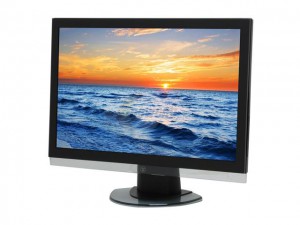 I had for a while (since 2006 or so) and was really pleased with it. Good contrast and color, HDMI interface, very snappy. The controls are very awkward, but after initially configuring it, it was good to go. I purchased a second monitor intending to have a perfect matching set. The second monitor turned out to be a slight hardware revision that include a curved bottom bezel and a number of…. features that were quite annoying. First of all, unlike the first monitor of the same model number, it will not display it’s “native” format of 1920×1200 so I’m stuck with it in 1920×1080. Not terrible, but awfully weird.

About a month ago, it suddenly started acting up. It would randomly just lose the signal and then a little later snap back on (almost like it had a loose connection). This condition went from slightly annoying to unusable within a week and then it stopped displaying at all at 1920×1080. I was able to get an image by reducing the resolution to 1280×768 but it had weird red overlays. My assumption was that it was failing and I bitterly unplugged it and went back to using one monitor. There went my productivity.

But thankfully, although I’m still mystified, the story has a good ending. I plugged my monitor back in a week ago and low and behold, the news of its death was greatly exagerated! It’s been working flawlessly ever since. I think it may have been driver related but I’m just thankful it’s back.

At my full-time gig, I also have dual monitors, although the overall resolution is a lot lower. I’ve found that it’s a huge time saver… One side is my code, and the other is the dev web site. The problem is that now I’m spoiled; I tried to work recently on my 1360×768 laptop and felt like I couldn’t see anything.

How about your setup? Do you use two monitors? If so, can you live without your second monitor once you’ve used it for a while?

Lifehacker has some great tips and links to tools for dual monitor setups.